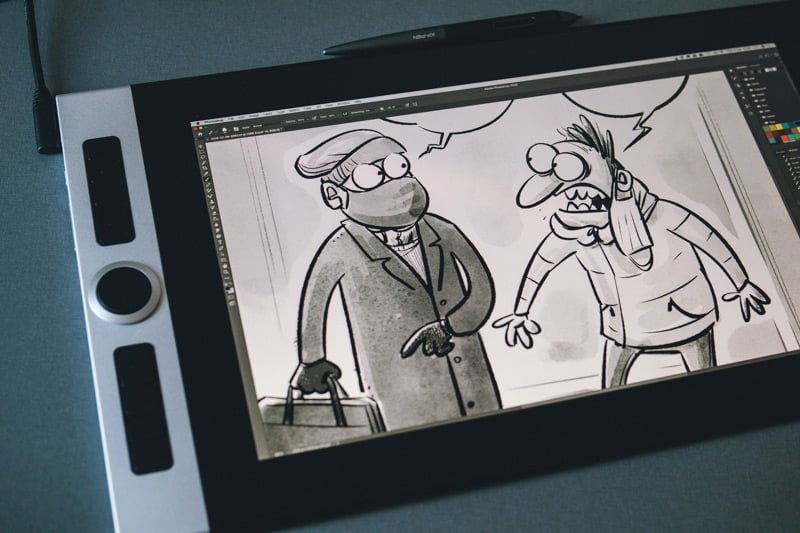 Since my favorite tablet size is 16 inches, the XP-Pen Innovator 16 fills the bill. Another advantage is that it can be easily picked up when needed and it does not require a permanent place on the table.

I use the iPad Pro most often for my daily digital drawing. But from time to time, when working with Adobe Photoshop I need a tablet that can be connect my computer. The XP-Pen Innovator works great when I need a tablet for this function.

The design should be commended.

Usually, these types of tablets are quite boring in terms of design, but this one is not.

This tablet gives me a feel of Star Wars.

The design probably plays a secondary role when choosing a tablet because the main thing when evaluating a tablet is the technical parameters and performance but the updated design is a pleasant addition.

It is the thinnest drawing tablet on the market today, only 9 mm thick.  Its size makes it very convenient to use it on the go.

I started with design, logically functionality is next.

And here the pleasant surprise of the Innovator 16 is the mechanical / virtual wheel – two in one.

This allows you to set any two functions. The first setting I usually choose is the zoom function and the second setting is the brush size function. But of course, everyone can choose to set the functions or shortcuts that are most convenient for them.

It must be said that the mechanical wheel could work better, it is too sensitive. Even the slightest touch sometimes can make it zoom out/in unexpectedly. When you use the wheel, you also can not feel the movement of it, so you are unsure of the positioning of the wheel. These are small issues, but if I would suggest any improvements to this tablet, this would be one of them.

Along with the double scroll wheel and buttons, the Innovator 16 allows you to set a total of 10 functions, plus two on the XP-PEN pencil.

There are no surprises here – as usual XP-PEN pencil works without batteries and is lightweight. Also, in terms of sensitivity, the pencil has the usual 8192 pressure sensitivity levels that have been available to pencils from almost all manufacturers in recent years.

As in my experience with other XP-PEN pencils, I would like it to respond better to the lightest of touches on the screen. But you can try to correct this with the help of a driver, which allows you to adjust the sensitivity of the pencil to your drawing style.

I have previously criticized XP-PEN pencils for distorting drawing lines in Autodesk Sketchbook.

I must say that this pencil behaves better and I think the Innovator 16 tablet can be used in Autodesk Sketchbook as well.

This pencil also supports a tilt function of up to 60 degrees. It means that when you use the appropriate brushes in Photoshop, the line on the drawing file will change from what angle the pencil holds to the screen.

We come to the screen.

Innovator 16 is a fully laminated display. This means there is no air gap between layers, thus there is no light refraction or light interference, making the screen clear and vibrant.

Many of the drawing tablets suffer from a common issue called parallax. With parallax – the line appearing on the screen is a few millimeters away from where the actual pen touches the surface. It deteriorates the drawing and writing experience. This mainly happens due to the gap between the top digitizer glass and the display layer. But the Innovator 16 with it’s laminated displays do not have parallax.

Great screen colors and a wide range of colors were the first things I noticed right away when I started using Innovator 16.

If you’re very picky about colors and want to adjust them even more, then the Windows driver offers that option. The Mac driver doesn’t offer it, but I don’t see the need for it, because I think the colors are great by default.

This is the first tablet I have set the screen brightness to maximum. The maximum brightness of the Innovator 16 is the same as the iPad Pro or iMac screen when set to 50% brightness. It’s not a big problem when working in a dark room, but it can be distracting when drawing in a sunny room.

XP-Pen Innovator 16 is connected to a computer with a cable that has USB-C on one end and HDMI and two USB-A connections on the other end. You do not need to connect both USB-A to run the tablet. The red one is only for additional power and usually I don’t connect it to the computer at all. After a while, I discovered that plugging in the red cable to my computer makes the screen a little brighter, but still not as bright as the iPad Pro or iMac.

The tablet screen does not have a etched glass surface, but is covered with a matte film. Personally, I have no objections to the film, because I have use a matte protective film on my iPad Pro screen for more convenient drawing and I am used to it.

By the way, all the functions and the pencil work with the screen powered off, while it is connected to your computer. Thus, you can use it similar to the Wacom Intuos series products.

What else is included in the box?

Along with the tablet and pencil, there is also a display stand, a pencil holder, 8 extra nibs, display cleaning cloth and a drawing glove included.

It is an upgraded XP-Pen 15.6 Artist Pro tablet with a great design. It has the same screen size, but with more accurate, natural colors. I really like the pencil more than the previous ones, but there is still room for growth.

You can buy it here:

If XP-Pen Innovator 16 seems to small for you, you can read my review about XP-Pen Artist 24 Pro.